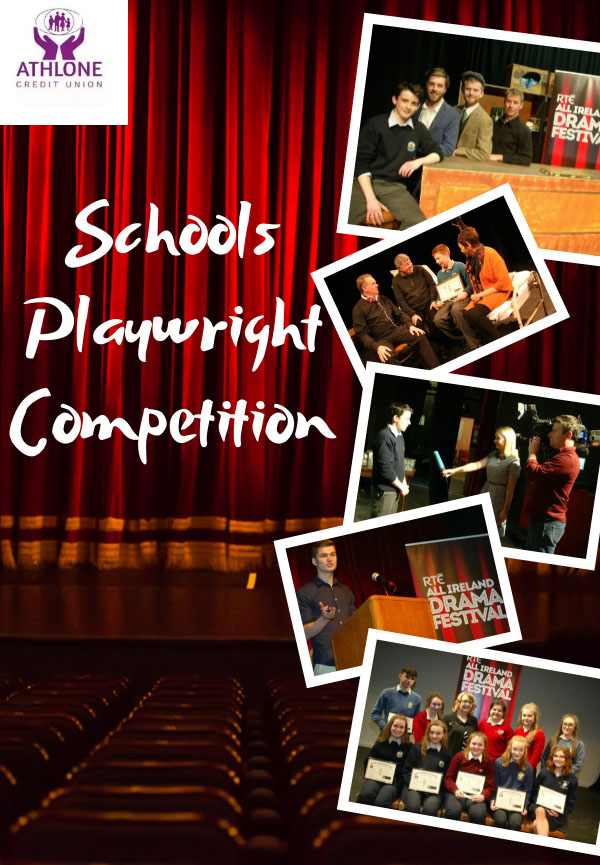 Athlone’s 2022 Schools Playwright Competition, held in conjunction with the RTÉ All Ireland Drama Festival and sponsored by the Athlone Credit Union saw Transition Year Students from eight counties compete – Cavan, Galway, Kildare, Meath, Offaly, Roscommon, Sligo and Tipperary. Fifteen Transition Year students from these counties were shortlisted for the top six scriptwriting awards and placement certificates plus the Schools Playwright Trophy for the winning script. This competition, now in its ninth year, involved the creation of a one act play on the theme of ‘Equality’.

Our Festival Committee will announce the placement order of the top six scriptwriters at an awards ceremony to be held in the Dean Crowe Theatre, Athlone, on Tuesday 3rd May. The winning script will be performed for Transition Year students, teachers and parents as part of the 2022 RTÉ All Ireland Drama Festival Fringe. Among the participants girls outnumbered boys at 3:1. Listed here in alphabetical order of surname are the top six successful students.

The correct placement order will not be revealed until the Awards Ceremony.

On the day of the awards ceremony a guest speaker will address those present (students, their teachers/parents etc.) on the importance of scriptwriting and the value of such. Mr. Joe MacCarrick, a director of plays and an actor himself with a keen interest in the arts will help complete the journey which these students have undertaken and hopefully it may further stimulate them to write a play for future staging.