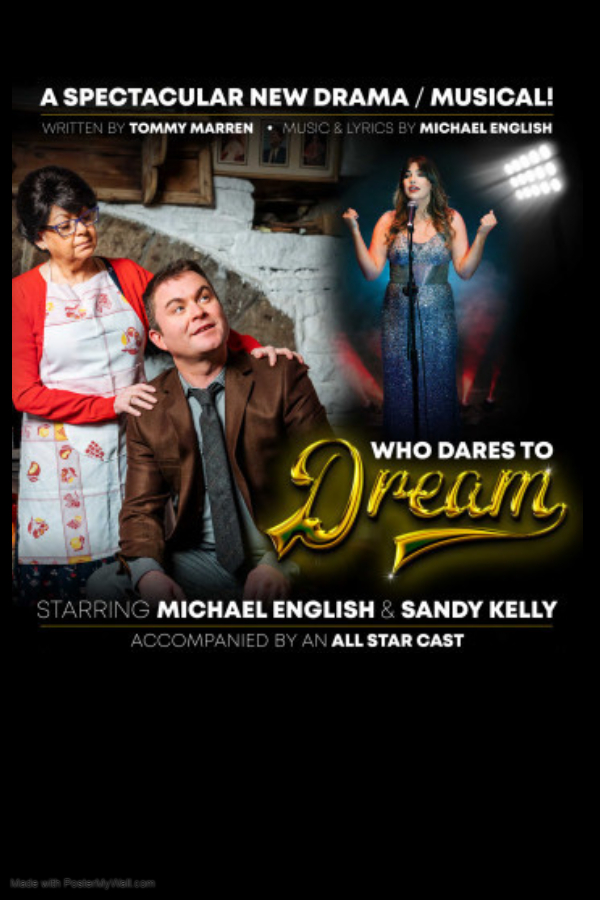 WHO DARES TO DREAM

Set in both Ireland and England in the 1960’s this spectacular stage show tells the story of Joey McCann (Michael English) who dreams of becoming a music star.

However, he is torn between his dream and that of his father who wants him to continue the family tradition of making shoes. Joey heads to England to pursue his dream but faces a series of challenges that threaten his ambitions of ending up in the bright lights of show business.

This two-hour show features a spectacular musical score and an intriguing storyline that will have audiences on the edge of their seats all night! With romance, comedy and determination we follow the ups and downs of Joey’s adventure as he struggles to turn his dream into reality.

Michael English is one of Ireland’s most popular country stars who packs out venues all over Ireland & The UK for both concerts & dances. Michael & his talented Band are renowned for their energetic performances & Michael’s superb piano playing, earning him a number of accolades like “Entertainer of the Year” & “Songwriter of the Year.” Michael has always had a huge passion for musical theatre & it’s always been a dream of his to write a musical.

Tommy Marren is an established Irish playwright whose works include the Irish hit-comedies ‘It’s The Real McCoy’, ‘Nobody’s Talking To Me’ and ‘3 Hail Mary’s’.
He has performed his plays in Ireland, the UK and America and continues to tour new productions every two years. He was also involved in the hit drama musicals
‘On A Wing and A Prayer’ and ‘Paddy the Musical’.

Please note: This event has been rescheduled from April 2020 to Tuesday 19th April 2022. We are currently in the process of refunding customers. Please note that due to the large number of refunds resulting from Covid-19 measures, payment processors have advised that there may be a longer than usual period for customers to receive credits back to their account. As such, we advise customers that it may take 15 working days to see the refund on your account. This refund will appear as Flowte. Tickets purchased by cash will be available to be refunded when the building reopens.